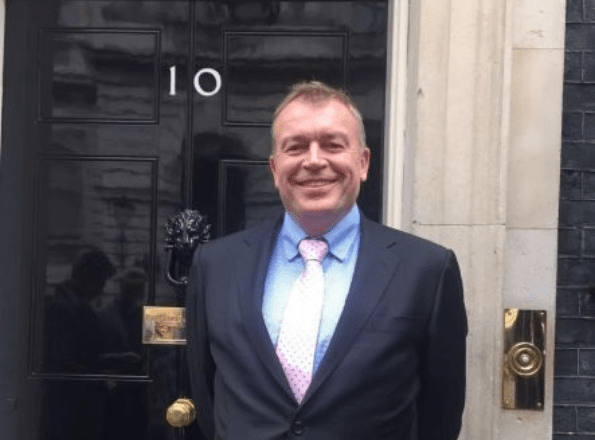 The great highroad of human welfare lies along the old highway of steadfast well-doing; and they who are the most persistent, and work in the truest spirit, will invariably be the most successful. – Samuel Smiles

It was during a quiet lull in world events, where my input or advice was evidently not required, that I came across the above wise words written by Samuel Smiles in his book ‘Self-Help – Character and Conduct’ printed in 1860. It was a book recommended to me by a dear friend and majestic Old Sedberghian, Charles Russam (E 58-62), and I was fortunate enough to find an original copy once owned by the late Vice Admiral James Lacon Hammet.

It is a book that inspires me just as much as one supposes it once inspired the Vice Admiral while stationed in Malta. In the intervening years, between when he died in 1905 and my purchase in 2020, its provenance is unknown, but I would like to think that the wise words bound within its covers have proved a worthy and instructional companion to those fortunate enough to have had it within their possession during the last century.

As I am sure many will know, this modern world doesn’t leave you alone for long, and so I try to maximise the efficiency of my free time by multitasking. In this instance I came across these lines just as Consul Quintus Arrius (played by Jack Hawkins) was testing the mettle of the galley ship in the 1959 epic, Ben Hur, on the tv. This is the part where 200 muscular and half naked men are chained to their oars in the bowels of the ship, and who, despite their years of incarceration, all have sun tans to die for. This scene used to send our grannies wild and it’s how our Alumni Director, Ben Collins, allegedly got his name.

The tension builds as Jack Hawkins takes his seat and instructs the ‘hortator’ (the chap with big biceps keeping time) to strike oars. Normal speed is called for. Sweat starts to drip from Charlton Heston’s brow. He looks defiant as Jack Hawkins calls for battle speed. Swarthy men start fainting; surely, they can’t take any more. But more is called for as the instruction is given for attack speed. Charlton Heston continues to row, continues to look defiant, while the man with the big biceps drums away ever faster. As always, it ends with those two great icons of the cinema, Charlton Heston and Jack Hawkins, having a ‘face-off’, while I invariably reach for my phone to renew my lapsed gym membership.

Some things stand the test of time. They do so because they are true to themselves, and this authenticity continues to resonate with each arising generation. Of course, each generation may interpret things in a different way, they might have a different insight and perspective, but the appreciation endures. Ben Hur and ‘Self-Help Character and Conduct’ are two examples of this.

Sedbergh School too, has stood the test of time. Likewise, Casterton Sedbergh Prep, continues to be a place of outstanding education. Both these institutions are approaching major milestones. Casterton Sedbergh Prep celebrates its bicentenary in 2023. Sedbergh School celebrates its quincentenary in 2025. Both have followed the old highway of steadfast well-doing. Both have worked in the truest spirit.

In celebration of this the Sedbergh School community is making grand plans. The Sedbergh 500 appeal has been launched which aims to raise funds for ambitious capital projects for both institutions. There will be gatherings, both large and small, the two largest being at Casterton in June 2023 and at Sedbergh in 2025. These will be once-in-a-lifetime events and not to be missed.

Behind the scenes, and in the bowels of the OS Club, we will be rowing with all our might to make sure our ship keeps a steady course and meets the demands and rigours of the waters ahead. Our ship, our Club, is a classic in its own right. It endures. It does so because it is true to itself.